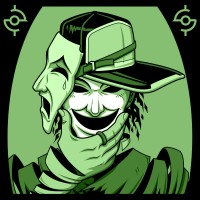 Brandon K. Montoya was born and raised in Southern California. He developed an interest in music through early hip hop acts and pursued this interest while working hard on a career as a writer and artist inside the comic, game and movie industries as well. Re-asserting his musical roots. His music will be available on the Soundtrack to “Terms Of Azimuth” a 2010 film due out from Gravitywell Production, No Brainer Films and Timescape Entertainment.

He has free music and links to his art and stories on his website, HealthyInsanity.com . He is the Vice President of Gravitywell Productions and has been with the company since 1995.

Brandon created this Jingle For Soundtrackloops.com using all the available free loops

New album from Brandon K. Montoya aka The Incomplete Orchestra.

In addition to Mr. Montoya’s own mixing skills, other artists from around
the globe have dug into their own creative toolboxes to expand this mix.
Kruzzial lends his B-Boy experience to remix the track “Operation Cast
Lead” while Presse from France shows his skills over several vocal tracks.
Also not to be missed is the contribution from Mixgalaxy Records, a
netlabel from Russia. Several of their sound producers “competed” with one
another to remix “Tricky Dicky” and all but one of the songs is available
on this CD.

Also available on his website at healthyinsanity.com is a pack of
home-made, lo-fi noise recordings used to make the song “Army Of Bums”
from the same album. The loops are released under a Creative Commons 3.0
by license.

New acapellas up at CCMixter.org

Brandon is a heavy support of CCMixter and releases all of his acapellas
under a Creative Commons 3.0 Attribution By license. What this means is
that you can take those vocals and use them commercially! Many other
CCmixter artist also release pellas under the same license, so get your
favorite SoundTrackLoops pack and hook up your own Top 40 hit with these
creative commons acapellas.

A few weeks ago we decided to remix randomly choosen hip-hop acapellas. We
remixed ‘Tricky Dicky’ by Coruscate (Brandon K. Montoya) and the mixes by
Cubic and Gipa have been included in our latest compilation Music For the
Weird Clerk Fish”
https://mixgalaxyrecords.com/releases/mixg009

But that’s only part of the story. First there were two artists involved,
then a few others decided to take part. As a result we’ve did about 6-8
remixes but most stayed on our hard drives. But now four remixes by Gipa,
Cubic, Nuts Gives Power and Alexander Chereshnev are available for sale
among other good tracks. Mr. Montoya has just released his album under his
main alias ‘The Incmplete Orchestra’. You’re welcome to listen and buy it
if you like. Coruscate is also very active CC-movement supporter who
posted lot of clean, top notch acapellas and allows everyone to use them
in their commercial productions.
https://ccmixter.org/people/Coruscate

So this is how you can pay him back the favor: 23 hip-hop tunes for just $5.
*The Incmplete Orchestra – Healthy Insanity Dot Commandos*
https://www.nimbitmusic.com/theincompleteorchestra